the bag used in some models of vacuum cleanerfor the collection of dust The dust bag is easy to change. Don’t operate a cleaner without a dust bag in place. 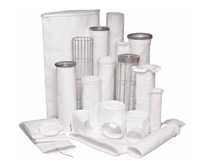 Dew Flow Cellouse Pads
Apart from manufacturing the fans for various applications. Dew flow markets the cellouse pad. Made by various companies in India and abroad and are well established with respect to poultry, horticulture (Green House) and industrial applications.

The Evaporative cooling pad (ECP), made of cellouse paper is engineered from cross-sectional, specially treated flute media capable of absorbing and retaining water to provide the maximum cooling efficiencies. The cellouse media is treated with stiffening and wetting agents to provide the cooling without any water carryover.

The pads are designed for tropical and subtropical countries, Ensure greatest performance during summer seasons.

The pad media is treated with anti-rot and rigidifying reins. The media is cross corrugated to maximize the air and water. Saturation efficiency ranging from 50 to 98% can be achieved depending upon air velocity and depth of the cooling pad.

Air flows horizontally, while the re-circulating water floes vertically, through the pad and is re circulated, again by a pump through the unique gutter system made of G.I. Sheet.

The dew flow cellouse pad is cross corrugated coated with an anti rot, rigidifying & wetting resins. The pad are made for maximum efficiency, at minimum pressure drop. 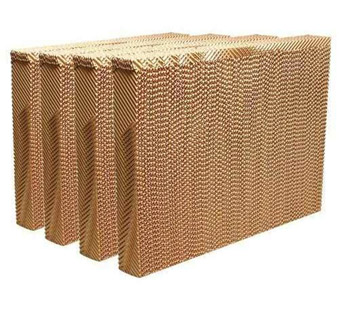 Dustech guarantees its products to be free of defects in materials and workmanship for a period of one year from the date of delivery from the factory, Provided motors are properly installed with overload protector.

Dustech agrees to repair or replace defective parts or part to be returned to the factory, all transportation charges prepaid. Dustech does not guarantee against abrasion, corrosion or erosion. Dustech shall not be held responsible for any charges in connection with the removal or replacement of alleged defective equipment nor for incidental consequential damages.

The intension of this brochure is to introduced you to, a acquaint you with, the capabilities of Dustech organization in the offered product areas. It will not answer all your immediate questions, and indeed, it will not doubt raise others. We welcome your interest in our products and shall be very pleased to provide further information.

In accordance with our policy of continual improvement in design, we reserve the right to depart from the details given in the brochure.

CLEAIR ESP System are over 95% efficient on mist, smoke and fumes removal to keep the work place clean. Polluted air is drawn by the motor/blower through a washable metallic mesh pre-filter which traps large dust particles oil vapor. The remaining particles in the CLEAIR works on the principle of electrostatic precipitation.

The remaining particles, some as small as 0.001 microns, pass into a strong electrical field (ionizing section) where the particulate receives an electrical charge. The charged particles then pass into a collector plate section made up of a series of equally spaced parallel plates.

Each alternate plate is charges with the same polarity as the particles, which repel while the interleaving plates are grounded, which attract and collect. The pollutants are held in these plates until they are washed away.

The resulting discharge air leaves virtually no oil mist, grease or hazardous particles untouched releasing only clean air from the system. Since the ESP cells are washable, reusing the collection cells eliminates costly filter replacements and disposal which allows for a greener environment and increased operational savings. 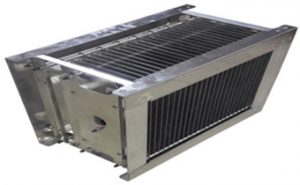 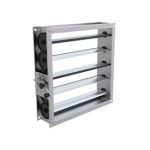 Dustech make multilouver dampers are used for air flow control; for either supply or exhaust air. 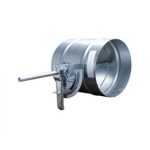 Dustech single leaf damper are used for balancing adjusting or control of air and are available in sizes from 100mm-1500mm.